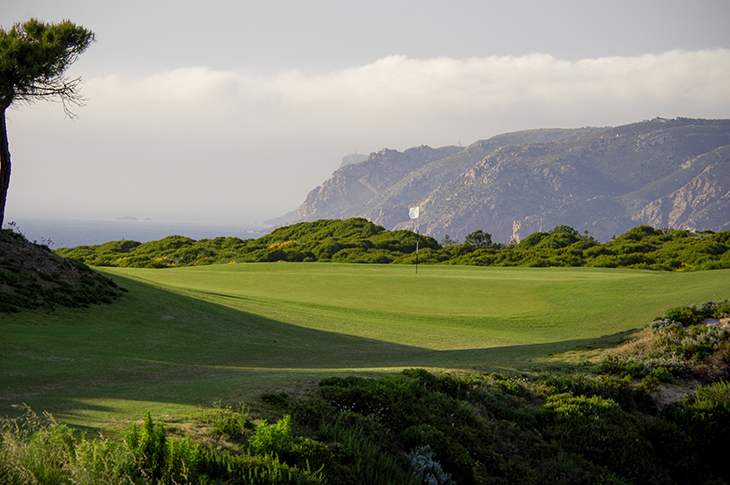 Spain to the left of me, Faro to the right… Who wouldn’t want to be stuck in the middle of this paradise? A developer’s delight, I was staring out over 1,000 acres of dramatic coastal countryside in the Eastern Algarve, that Jack Nicklaus had just agreed to build a golf course on.

When Monte Rei opened in 2007, you would’ve thought it was a bit late to the party, but if Jack Nicklaus had any magic left in him, then he poured it out over his ‘Signature’ course here.

Panning from the foothills of the Sierra do Caldeirao mountains to the horizon of the Atlantic, it’s what high resolution cameras were built for. And the use of elevation is breathtaking, especially on the first hole.

“I could play that first hole 18 times,” slobbered Mike, my partner-in-crime. In fact, we struggled to think of one weak hole over the entire layout. It came as no surprise when we were informed that this was the No.1 ranked course in Portugal. It seduces you all the way round and the staff bend over backwards to help you. I used to think that was all marketing speak to make me part with a few dollars but we would happily fly here every year if we could afford to.

Having a family who is not so keen on golf requires a resort where I can do my worst with the niblicks, safe in the knowledge that, whatever everyone else wants to do, it’s available.

As it happened, at Quinta Da Lago, I was instantly mesmerized by the quality of the three championship golf courses and was looking forward to a week of driving the links.

When I wasn’t hitting wedges off soft, spongy lies, I was hanging out with the girls at the giant lake, body surfing in the sea and helping ourselves to an endless supply of superb seafood restaurants. But back to the golf, I played Laranjal first.

Named after the orange groves that surround it, this track was voted Best Golf Course at the Portuguese Travel Awards. It’s a cracking course in immaculate condition especially when I made my birdie on the par-three 17th.

The South Course is no slouch either and regularly features in Europe’s Top 100 lists. Colin Montgomerie won his first ever Tour event here back in 1673 or something, and a young Paul McGinley had set up a state-of-the-art golf academy here on the resort. 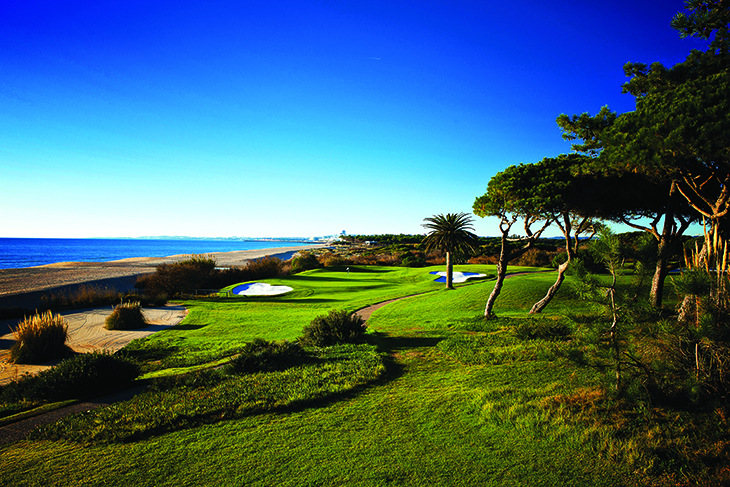 Into its 57th year, this local icon has aged beautifully. Euan Gillon recounts his visit…

When Sir Henry Cotton was first casting his eye over the orange cliffs of Vale do Lobo, golf was a relatively new word to the Portuguese, and the tourism industry as we now know it, a mere pipe dream.

The Algarve is a long way from Singapore. If Tour pros wanted to play in any ‘Portuguese Open’, they would have to sweat it out for 20 hours in a Ford Cortina for the privilege. 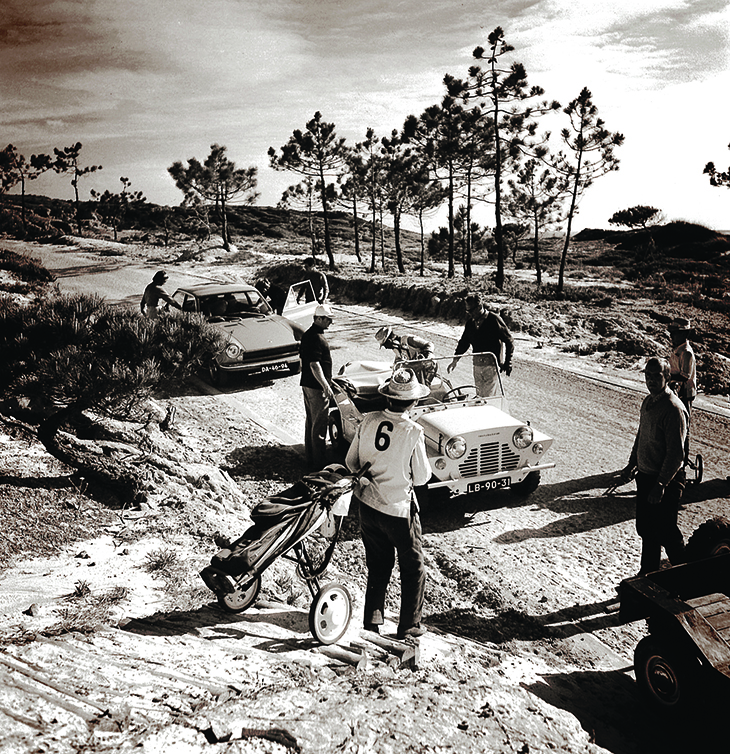 It took three years to complete two nine-hole courses and open up VDL for business, but a lot has changed since then. Those two nines have been split and made into two 18-hole courses —

that surround the courses, with even a purpose-built training ground for visiting football teams. Mind you, they could’ve turned down a planning permission or two, as it can be embarrassing fishing your balls out of back gardens. I can vouch for this.

The crown jewel is the cliff-top par-three, 16th. It’s probably the most famous hole in all of Portugal and the one you relive to anyone who will listen. 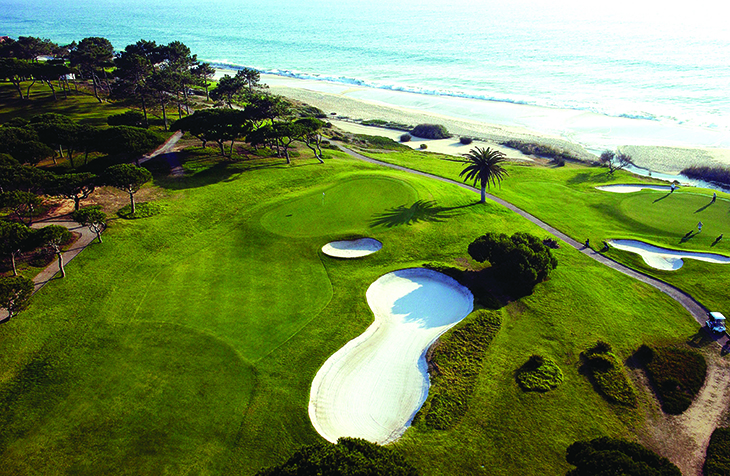 Come evening, the wife and I loved our flip-flop strolls along the beach, drifting in and out of bars and restaurants we’d find. With waves providing the background music, it was hard not to try every fish dish on the menu, so we did, coupled with some crisp Sancerre. It was easy to see why VDL is pride of place in Portugal’s golfing pantheon and has many an imitator. 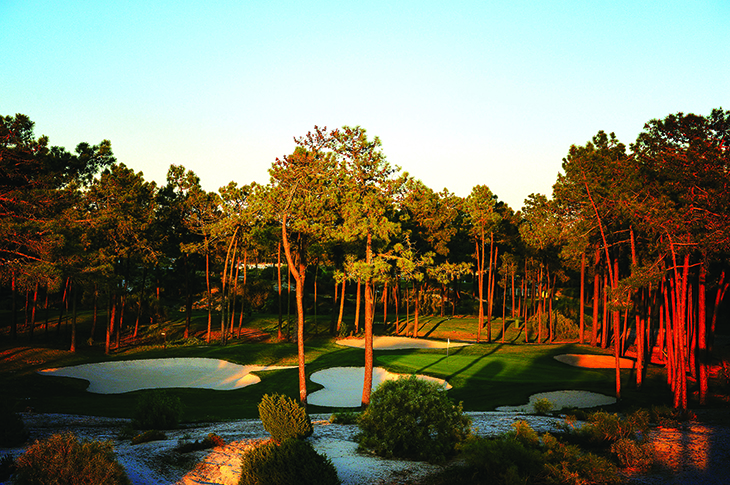 We went to Troia after being sucked in by a picture and the impulse to escape the dreary window of the office.

One of football’s greatest whiners and winners, Jose Mourinho, was born here and that further piqued my curiosity. As a destination, there are definitely far easier places to find than this peninsula off the coastline of the city of Setubal.

So, it’s a bit of a pig to get to, but that soon fades as you absorb why legendary golf course architect, the late Robert Trent Jones Sr, took on the job of building something special here.

Put simply, there are few better things in life than a golf course bathed in sun and surrounded by a backdrop of the ocean and mountains, and Troia as a resort delivers all of the above.

I had coerced my better half into this sunshine break, promising her a wonderful trip and as much seafood as she could eat. So, she trotted off to the beach every morning while I had a knock, and she even managed to talk me into taking the short ferry ride to Setubal to do some dolphin spotting.

If you like sun, sea, and beautiful golf courses then Troia is well worth the travel, and if you don’t like all of the above then you really don’t know what you’re missing. 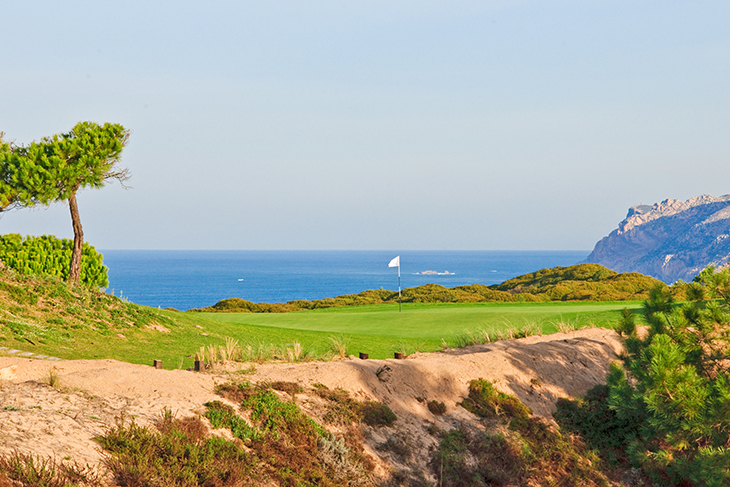 Having put a flag in everything that was green, the Algarve, understandably hogs the limelight in Portugal. But I’m one of those bores who likes to ‘immerse myself in the culture of a country’ and so shunned the all-inclusive, ‘sleep and score’ appeal of the Algarve for what’s known as the Silver Coast between Lisbon and Cascais.

It’s called this because of the way the Atlantic shimmers in the sun. That laidback image pretty much reflects the local attitudes that you’ll find in the pretty fishing villages that pepper the coastline, where old men in a flatcaps chew the fat while leaning on sticks. You will, however, occasionally see mountain bikers tearing through Lisbon’s cobbled streets.

The golf is pretty special too. The European Tour have been regular visitors to this corner, often playing over Oitavos Dunes, which I think is one of the prettiest courses in the country. There’s a linksy feel to the fairways and layout, especially when the breeze blows in from the sea. You do, though, get some protection from the tall bushy pines and shrubs which you’ll either love or hate depending on how many times you’re in them. I remember playing here in twilight thinking that this is what the end of the rainbow must look like. 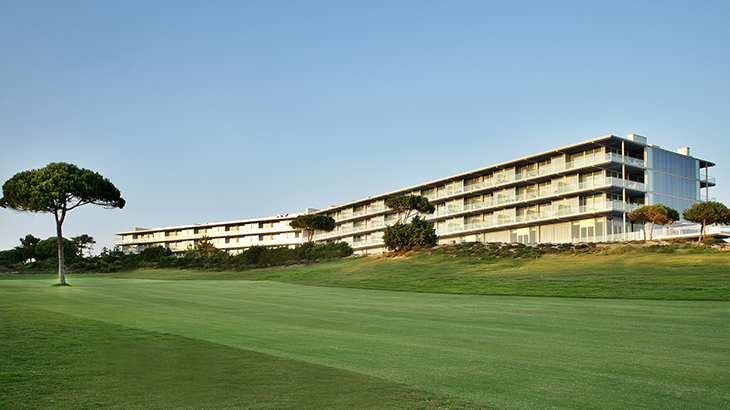 They’ve recently properly tarted up the clubhouse too. Not in the jacket and tie stakes. Just in a super-chilled out spec. I would also strongly recommend a night out in Cascais itself. Once a quaint little fishing town, the Portuguese Royal Family loved it so much they planted their holiday home here. It’s since grown into a buzzing little town packed with thin, crowded bars, restaurants and a buzzing little marina — a really cool place to toast a well-chosen holiday. 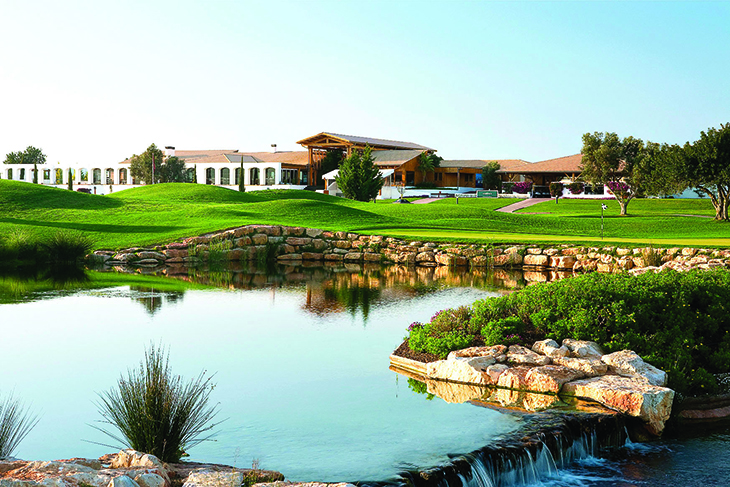 And herein lies the pot of golf at the end of a particularly beautiful Irish rainbow.

There are more Irish immigrants living across the world than are currently living in Ireland right now. That astonishing fact seems unbelievable until you set foot in Vilamoura, where the Irish-Portuguese owned, Oceanico Group reign supreme.

It was here I found myself round a table with Darren Clarke, Christy O’Connor Jnr and TV garden designer, Diarmuid Gavin as they cut the ribbon on this massive Portuguese development. It felt like a sunny day in Dublin, but was in fact a grand project of five courses and hotel rooms aplenty that earn Vilamoura its title as the largest luxury resort in Europe.

And you’ll find here exactly what the golfing tourist is looking for. ‘Championship’ Golf courses that have been deliberately handcrafted for the front of brochures with multiple tees meaning they can accommodate everyone from the European Tour to the hungover pensioner.

The likes of Arnold Palmer, Christy and Robert Trent Jones Jr have shaped the lush grass and indigenous umbrella pines against the warm sea breezes that I found a really enjoyable test. A lot of big target areas, a couple of shaky shots over water, and the fact you play in shorts more often than not makes everything taste sweeter.

All the holiday boxes are ticked: Kidneyshaped pools; sun-soaked balconies; al fresco bars. And that’s the entire point of coming to Vilamoura. It’s been sculpted by people fed up with lost rainy UK days, who were dreaming of the perfect getaway.

So they built it. And if that’s what you’re looking for — and big groups of golfers often are — this will be the perfect Portugal break for you. 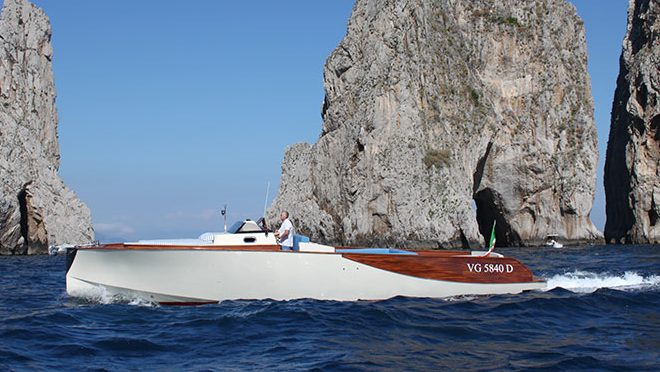 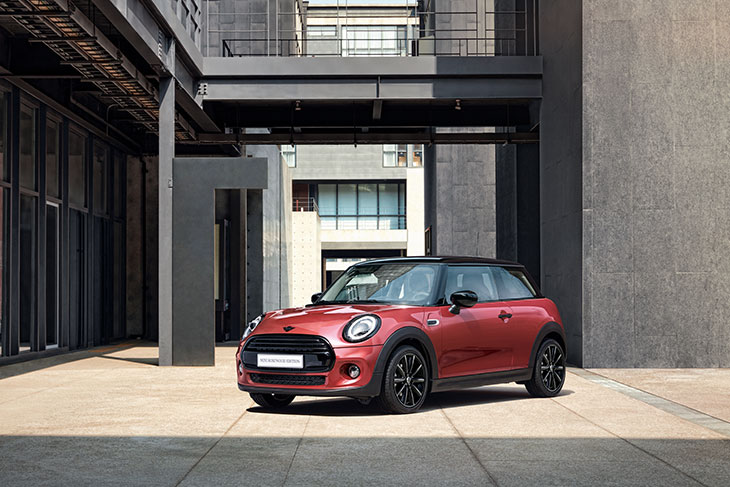 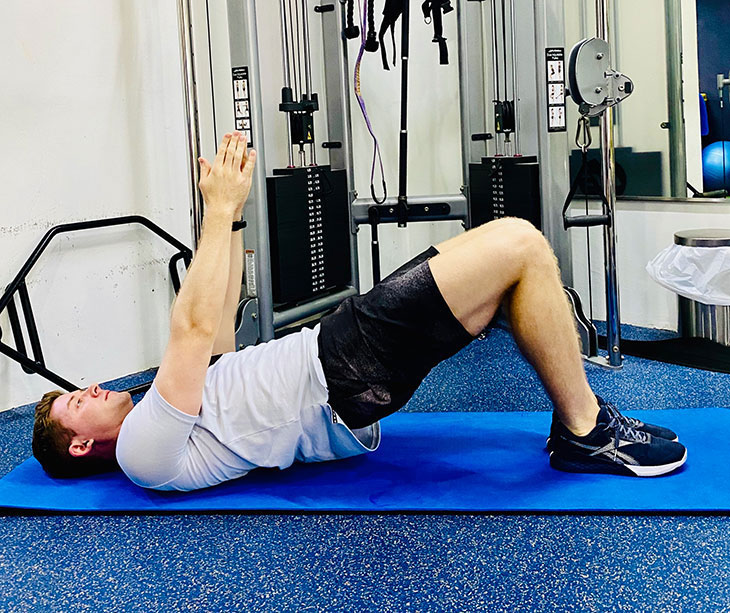 The King Of Power 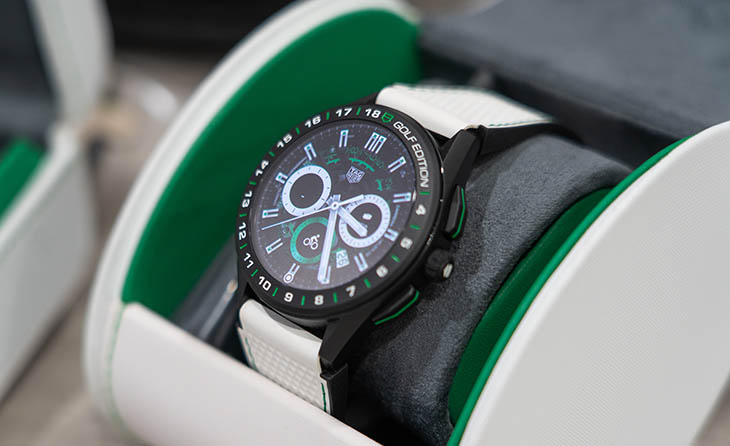