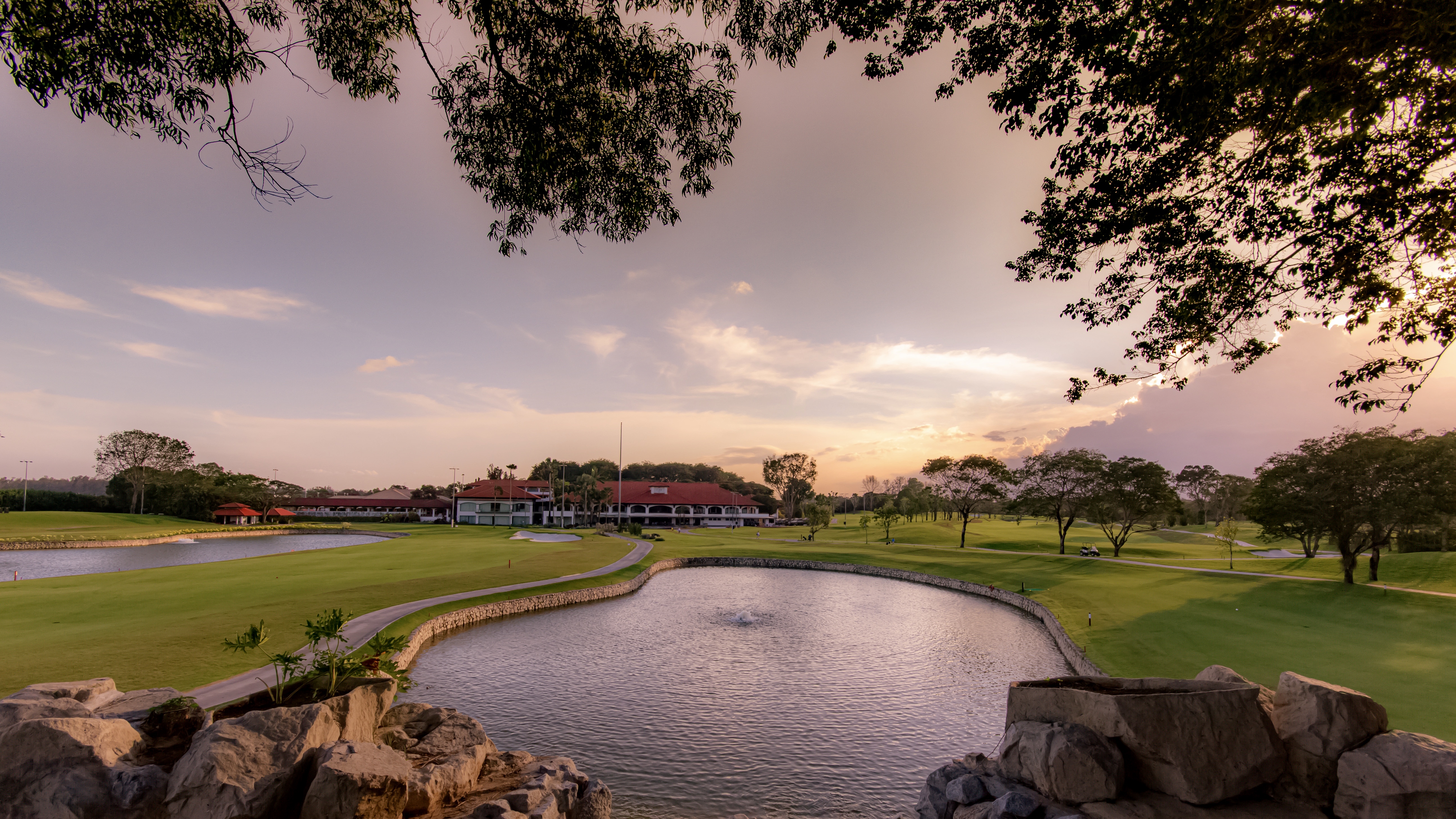 The Garden Course at the Tanah Merah Country Club, a premier golf club in Singapore, has an illustrious heritage. Originally sculpted from a barren piece of reclaimed land by Thomson, Wolveridge, Fream and Associates, it opened for play in 1984 as the East Course. It was renamed as the Garden Course in 1987 when it hosted its first professional golf tournament, the Kosaido Asahi Asia Lady Professionals Golf Championship. Together with the Singapore Open Golf Championship, it has hosted both championships for five years each.

Later renovated by Max Wexler and re-launched as a “new” Garden Course in 1994, it received further acclaim in 1996 when it hosted the Johnny Walker Classic. This event saw Major winners and golfing greats like Fred Couples, Greg Norman, Bernhard Langer and Ernie Els grace the course. This firmly established the Garden Course as a great Championship venue. The Tiger Skins event hosted in 2002 also saw more Major winners like Vijay Singh, Retief Goosen, Padraig Harrington and Sergio Garcia play the course. Following a redesign by Phil Jacobs in 2006, the course was stretched to a mighty 6,721 metres from the tips, the longest layout in Singapore at the time. It then reached the peak of its international acclaim when it had LPGA legends like Annika Sorenstam, Se Ri Pak, Lorena Ochoa and many more, play the course when it hosted the Lexus Cup and the first five years of the HSBC Women’s Champions. 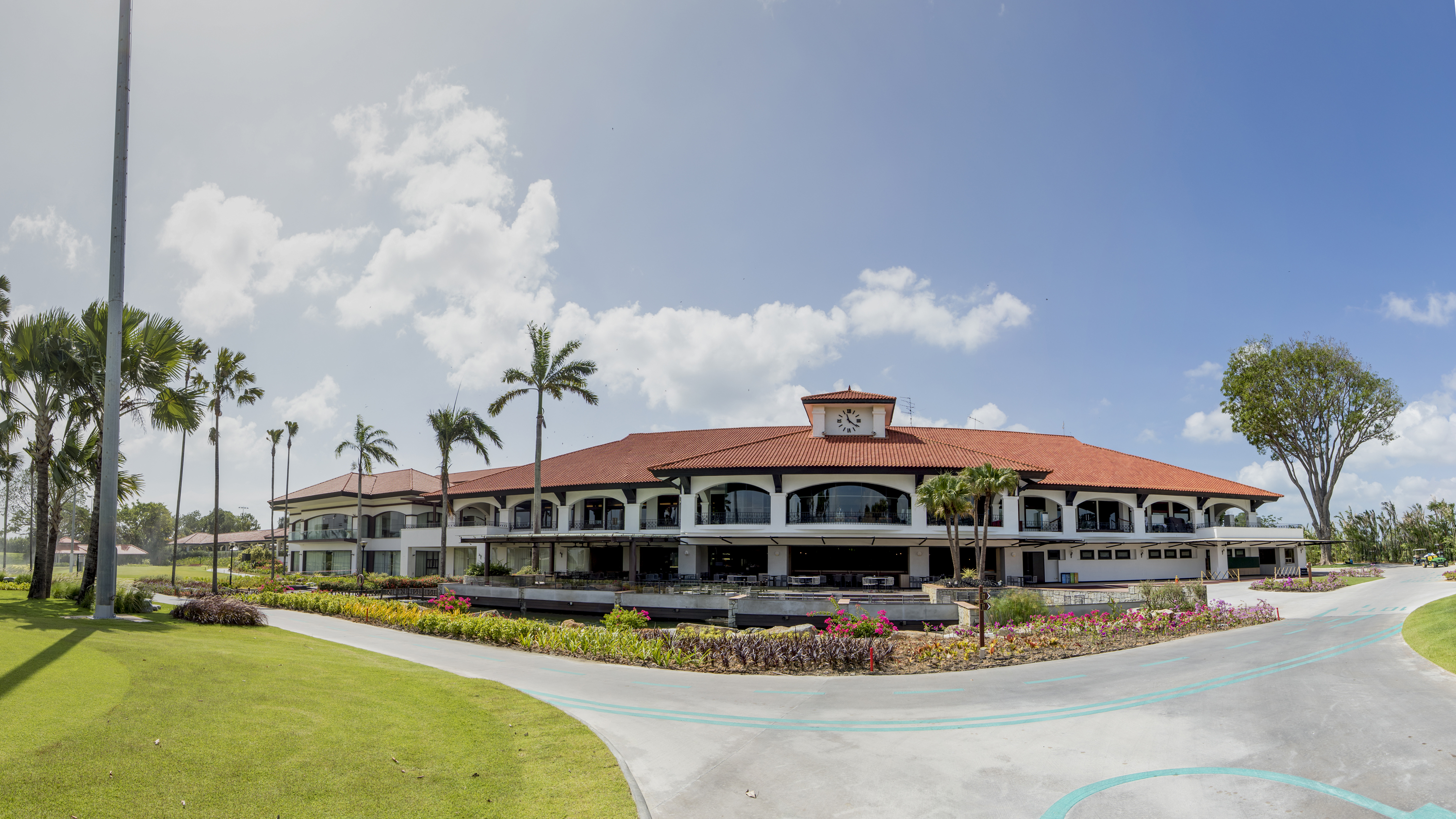 The all too familar view of the Clubhouse

Since 2014, the course has sadly lost about 20 hectares to government land acquisition for the expansion of the neighbouring Changi Airport and widening of the surrounding expressways. The first land loss of 10 hectares saw the Garden Course reduced to a 6,000m par 70 course in 2015. It then closed for a complete revamp in early 2019 when it lost another 10 hectares.

Left with barely 41 hectares to work with, redesigning the Garden Course was no walk in the park. The task fell upon renowned golf course architect Robert Trent Jones ll (RTJ II), whose work includes the 2015 US Open venue, Chambers Bay, the Links at Spanish Bay and Cordevalle. RTJ II‘s creativity shone as he carved out a 5,706m design with a good mix of long and short, as well as narrow and wide holes that wrapped around lakes, and exhibited peninsular teeing areas, tree-lined corridors and strategically placed bunkering. Additionally, his routing utilised the oft present winds blowing in from the nearby coast as an added defence in compensation for the shortened length.

Another unique feature of the course enables walking golfers. A trio of three, six or nine-hole loops start and finish in proximity to the clubhouse . The outward 9-hole loop was christened the “Garden Loop,” while holes 10 through 15 make up the six-hole “Sunrise Loop,” and holes 16 through 18 were dubbed the “Learning Loop”.

Opened for play on February 10 as a par 71 and almost 300m shorter than previously, the new Garden Course still poses a decent challenge for the average golfer. For some, this course brings back the element of shot shaping off the tee where one would have to decide on a fade or a draw to avoid bunkers and be in a good position into the green. The short 472m dog-leg right par 5 13th hole, for example, requires a power fade around the expansive tree on the right to set up nicely for a well-struck second shot to be on in two. 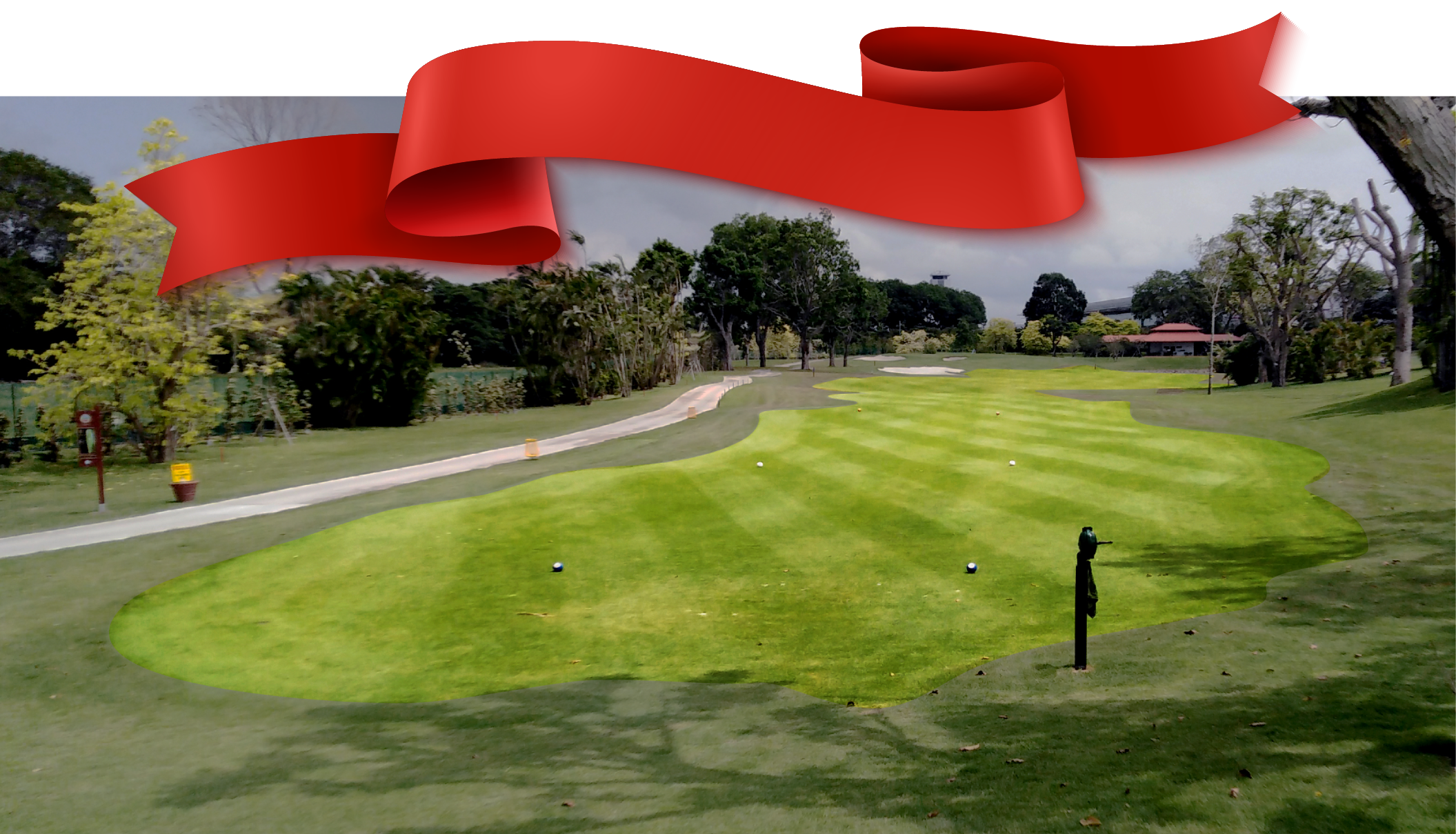 A subtle yet no less interesting design feature of the new Garden Course, are the “ribbon tees” that run along a stretch of raised meandering turf, unlike traditional flat or tiered tee boxes. Pay careful attention to the undulations as they add another element of challenge to the shortened course. Myriad tee placements are in play daily to keep the course interesting for the players. Wiley golfers will know to work within the allotted 2 club-length allowance to locate the ideal part of the tee box for shot shaping. A good example would be the 340m par 4 10th where a menacing bunker on the right of the fairway awaits the tee shot over water. It pays then to find a spot slightly above the feet on the left of the tee box to promote a draw, safely away from the bunker to a fairly generous landing area on the left. Experts of the game have lauded RTJ ll on the ribbon tee creations that first featured in Chambers Bay, venue of the 2015 US Open.

With most greens varying both in size and undulation, along with strategically placed bunkers throughout, there is a definite premium on well-placed approach shots or one can quickly lose a stroke or three around and on the greens. The rather flattish fronts of most greens open up the option for players to run the ball on if preferred. A peppering of raised fronts though, call for a forced carry onto the putting surface, as on the 4th,15th and 16th holes. Yet if one has a deft enough touch, the firmer fairways still allow for a running shot on these holes; which on some other holes, is an ideal choice, since the contours of the green would come in very handy in funnelling the ball close to the pin. 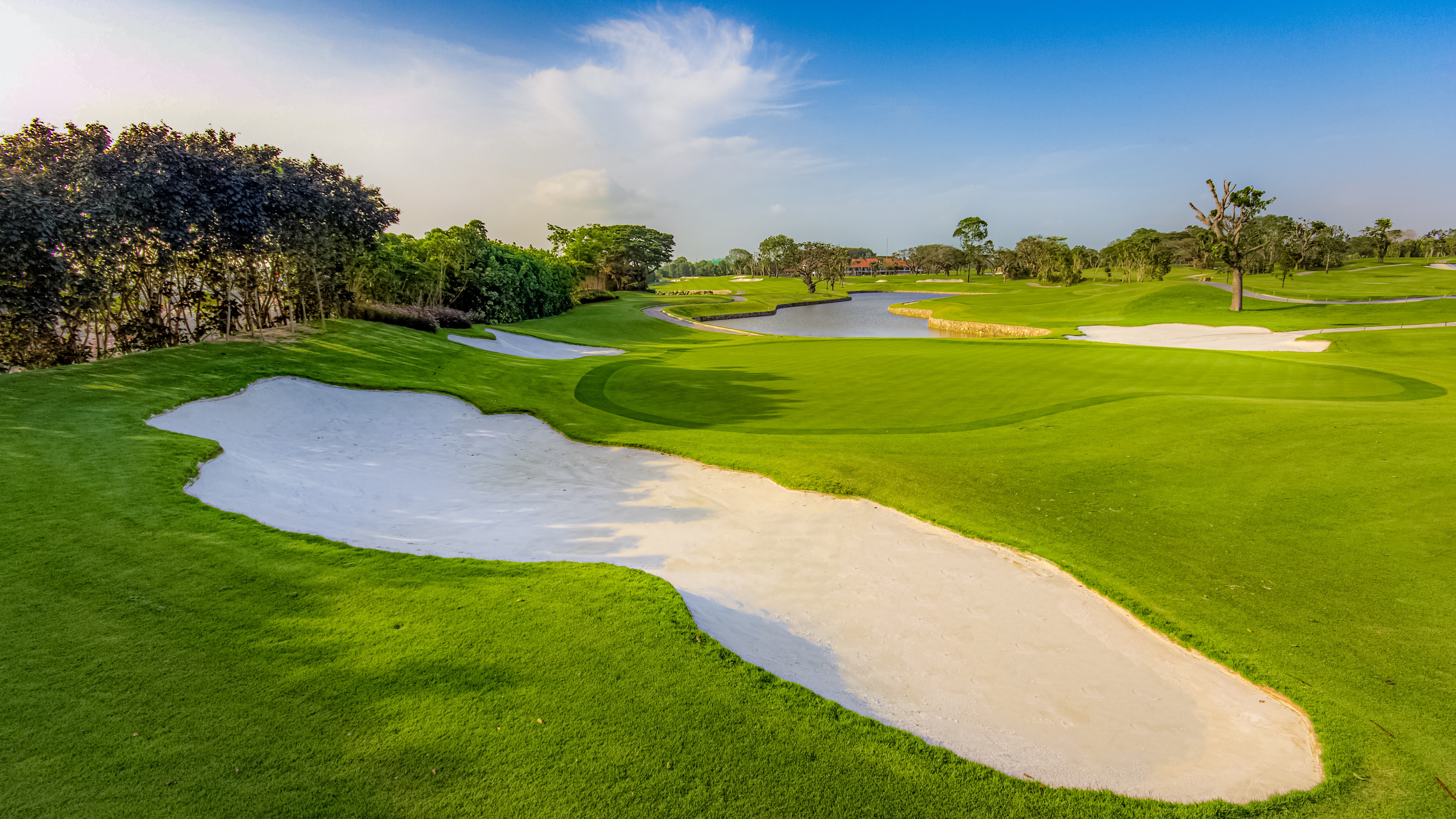 8th Green – looking out towards Hole 9 and Hole 11

For the longer hitting professional and better amateur golfer, this course plays a tad easy as the par 5s are all reachable in two and several of the par 4s are driveable – most notably the 4th, 6th, 8th, 12th and 16th holes. Even so, we reckon it would still be a fun course to play and certainly a confidence booster, not that anyone would mind shooting a 7-under 64.

While driving the green on the par 4s and getting on in two for the par 5s is not uncommon for these players, the risk-reward layout on some of these holes is more than enough reason for a cause to pause. A good case in point would be the 6th Hole 312m par 4. Taking into account the wind, perfect drives would have to carry over a large body of water to reach the green, otherwise a highly possible birdie or eagle chance can very quickly turn into a watery bogey or worse. 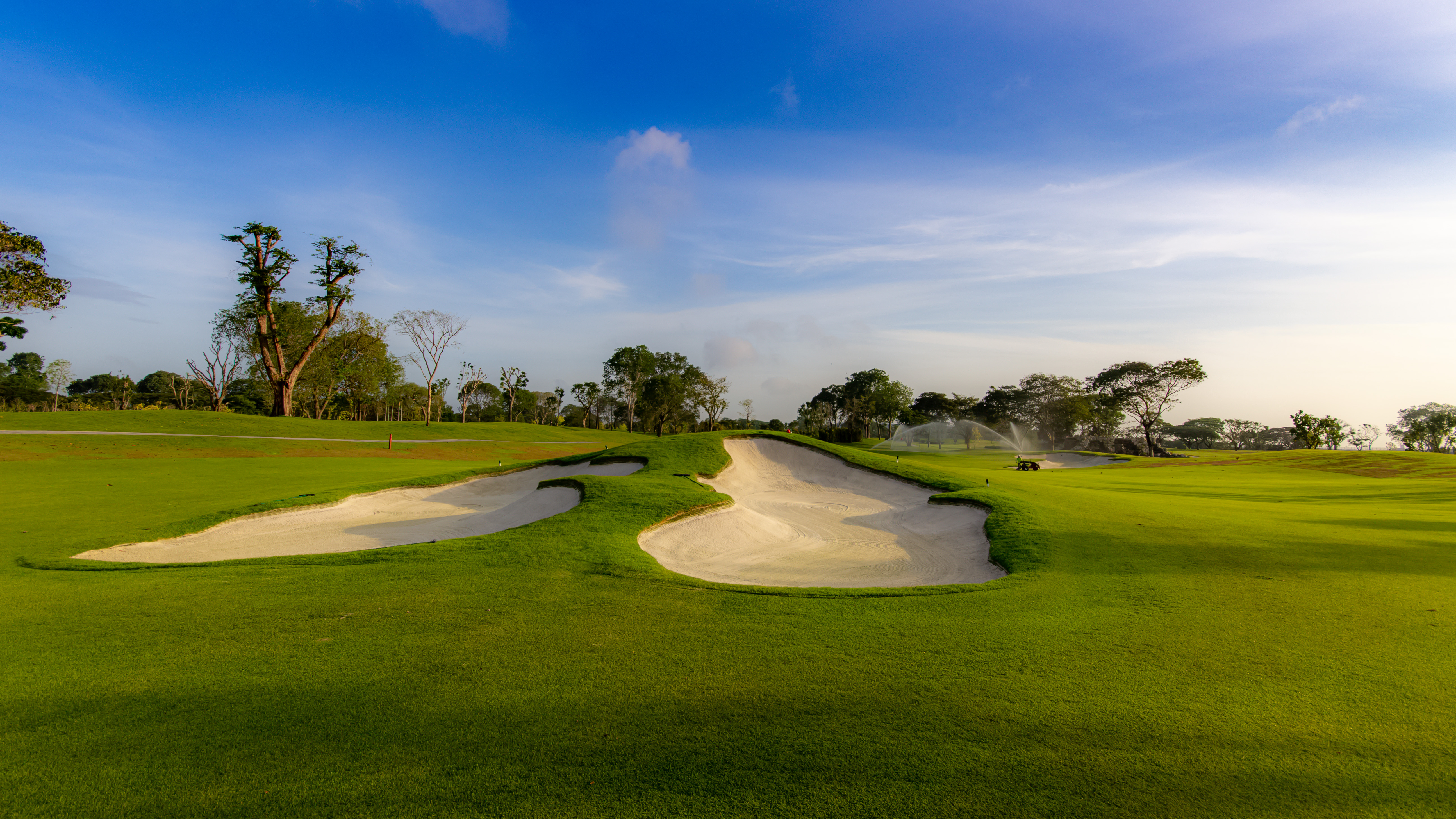 There are a couple of meatier holes, especially when into a headwind, like the index 2, 381m par 4 15th hole where the tee shot needs to negotiate two high-faced bunkers set in the middle of the fairway. Thereafter, the approach needs pin-point accuracy into a small shallow two-tier raised green guarded by bunkers right and left. With a tricky pin position and firm greens, a bogey is as good as gold on this hole.

Hole 18 – final approach on the homestretch

Negotiating the topography on some of the greens requires imagination, like on the 18th where the green is flanked by a bunker on the front right, and water on the left. Swales on the firm surface feed a ball from right to left and players will be faced with the conundrum of how best to play into the green, especially if the pin is tucked close to the water’s edge. 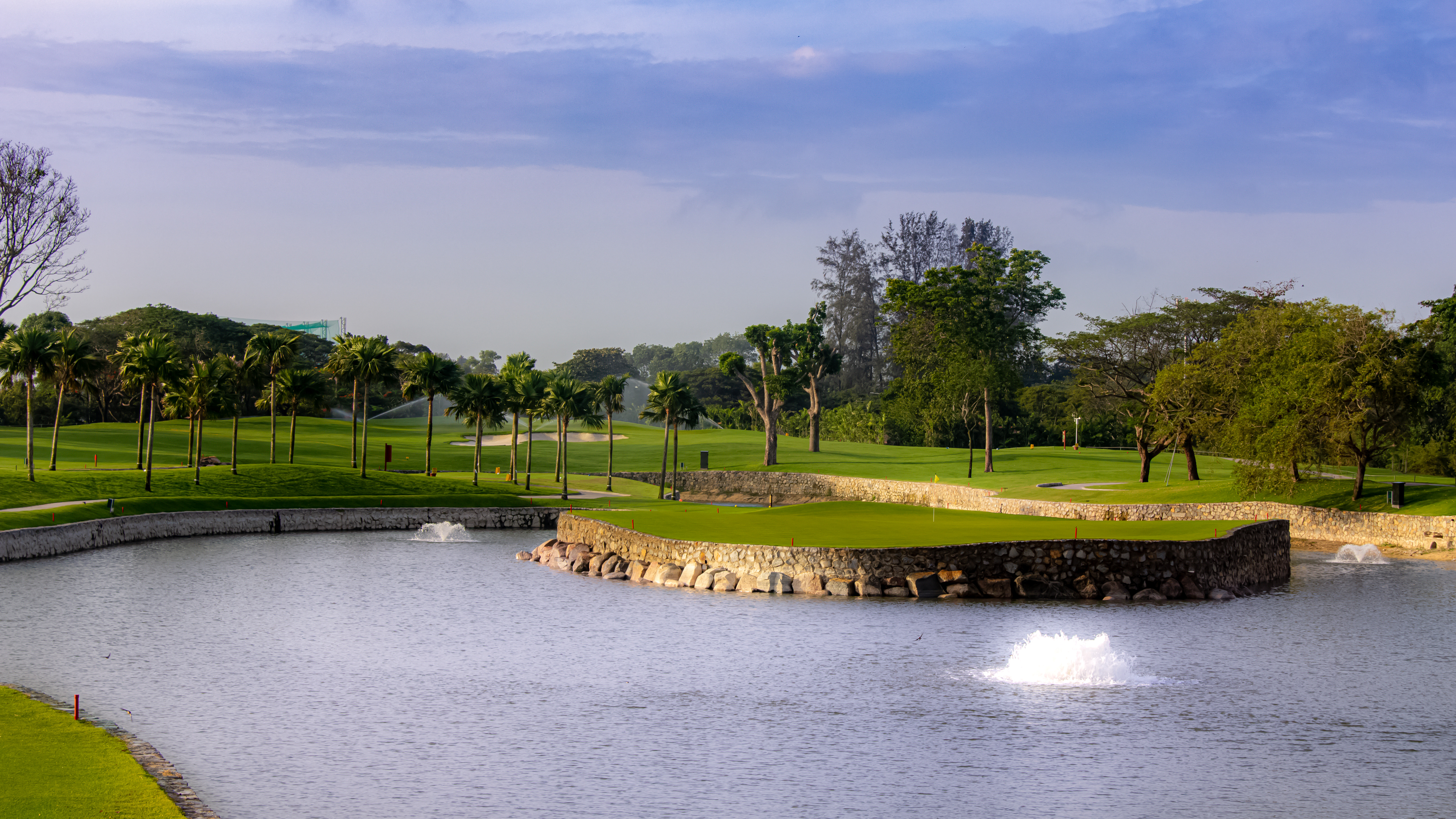 The five pars 3s here are memorably well designed, with two particularly noteworthy. The signature 174m, 14th island par 3 is widely considered to be one of the toughest holes on the course, bearing some semblance to the famous par 3 17th at TPC Sawgrass, sans bunker. With wind in play, choosing the right club and keeping the ball on this large firm green is a tricky proposition. Some of the best players among us have walked away with a double-bogey on this treacherous hole. 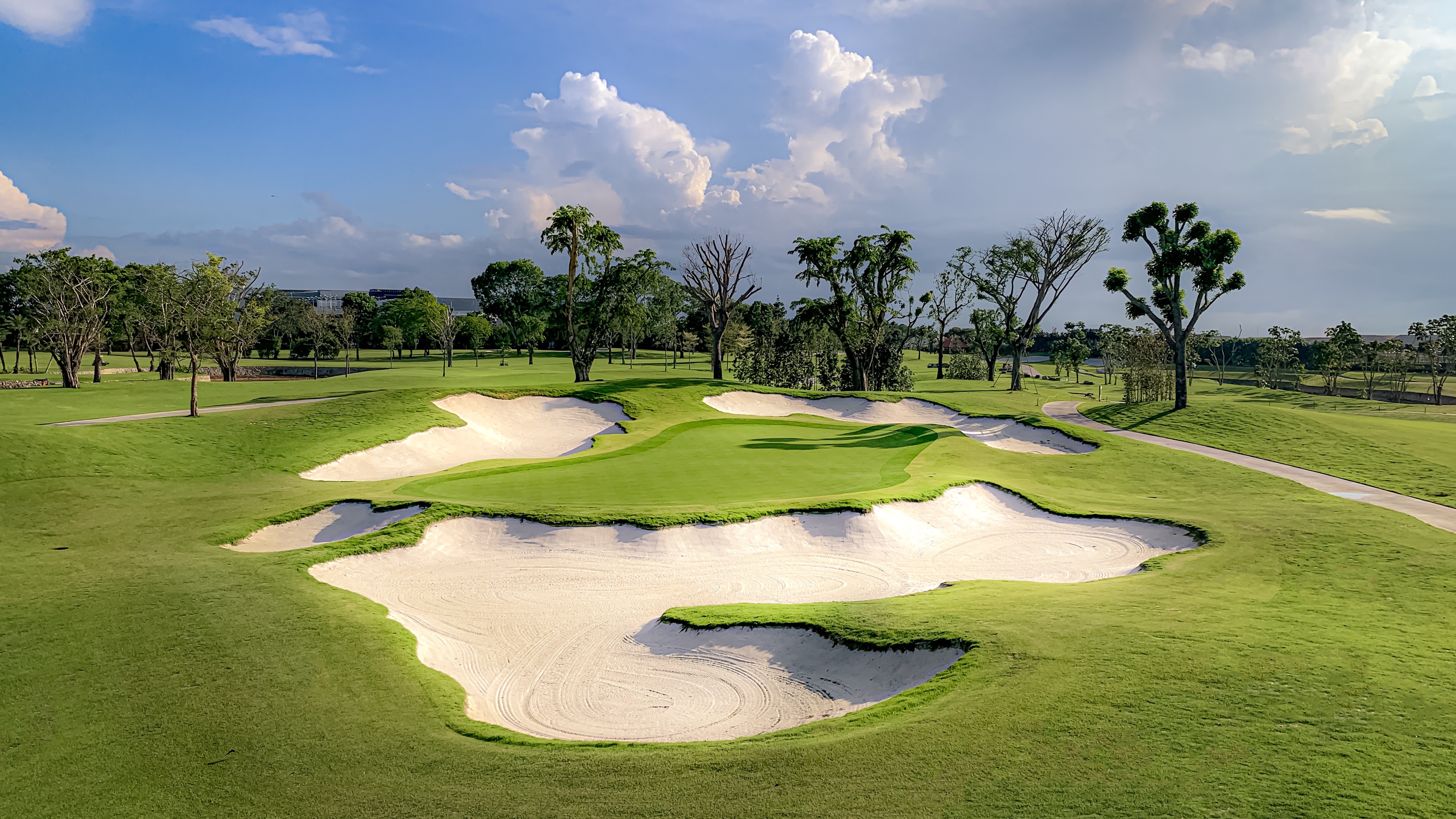 The 138m, 17th hole par 3, is another beauty where a slightly elevated tee box directs you onto a small green encircled by bunkers. Players less than stellar with a sand wedge should take a deep breath or two before pulling the trigger, especially with the prevalent swirling winds on this hole. 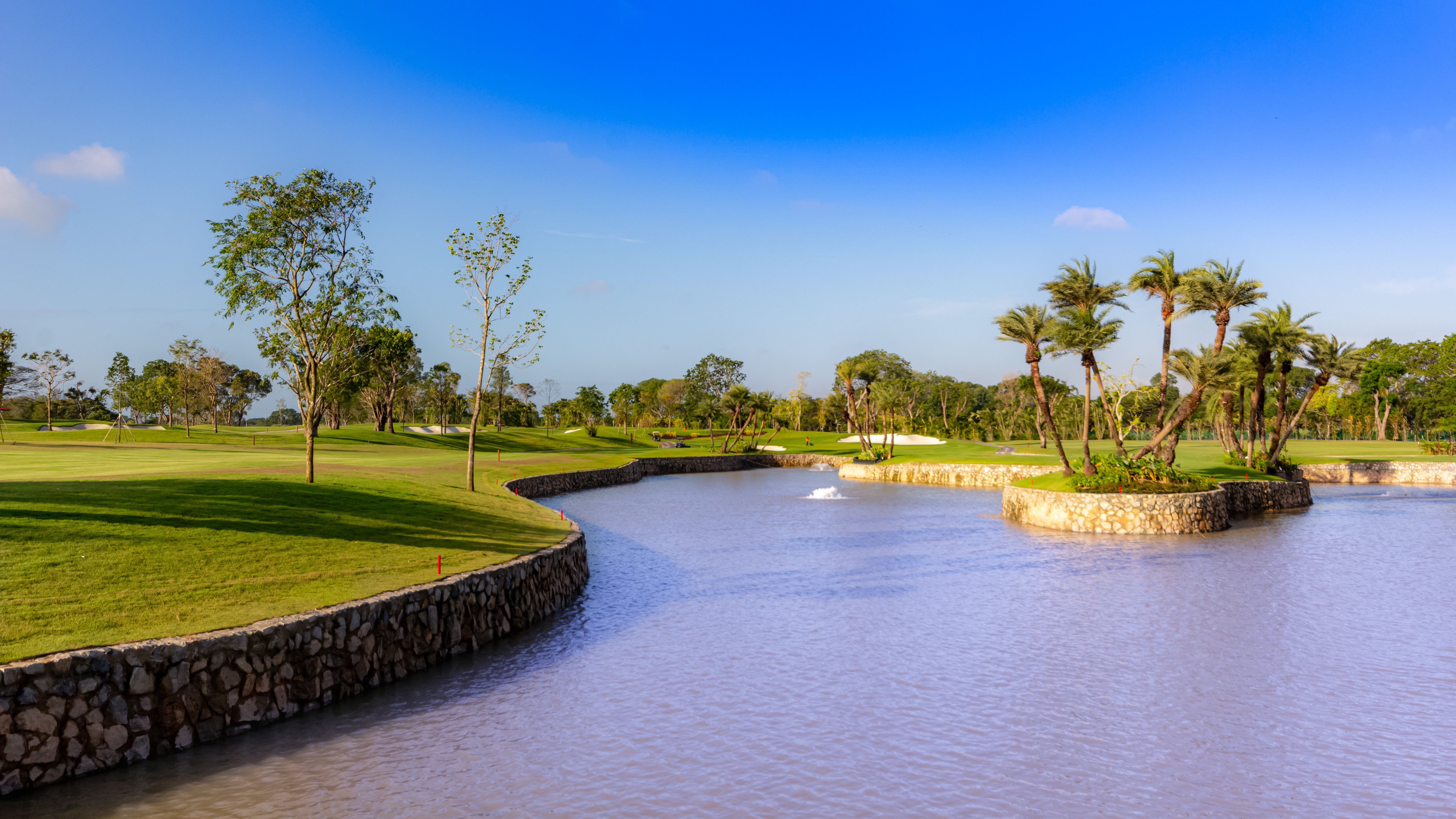 The new Garden Course is a delightful play for golfers of all abilities. While some may not consider it a challenging competition course like previous iterations of the past, the current layout inspires the best out of regular social golfers. One can expect to shoot in the 70s one day, then struggle to break 80 the next few games on account of a few nemesis holes. 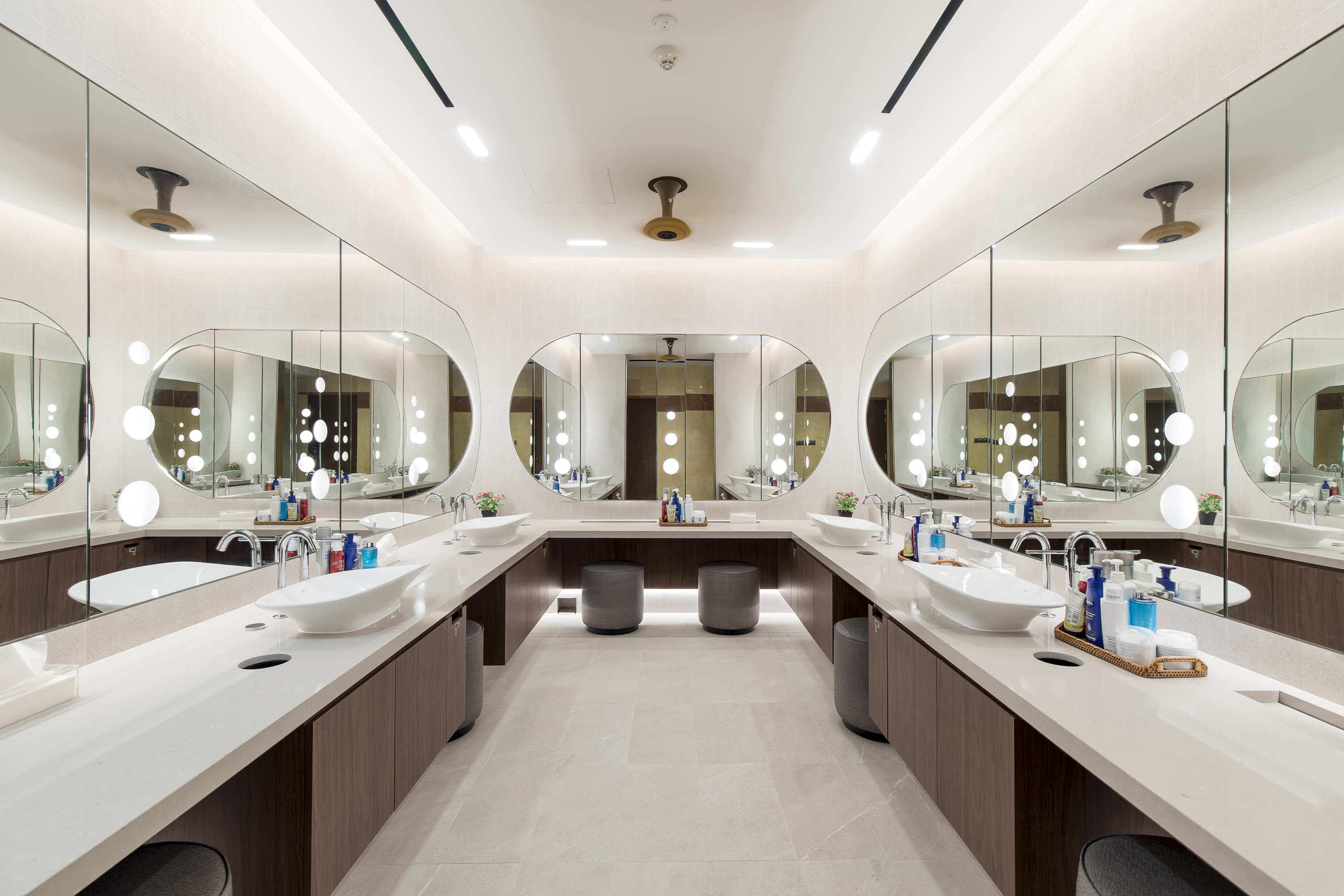 The many palm trees and water features adorning the new Garden Course projects a resort-like feel with a friendly social vibe, where one can watch friends on adjoining holes hitting shots. Greetings and friendly waves are commonplace, giving the new Garden Course a decidedly charming homely feel further complemented by the newly renovated golfers terrace and changing rooms. 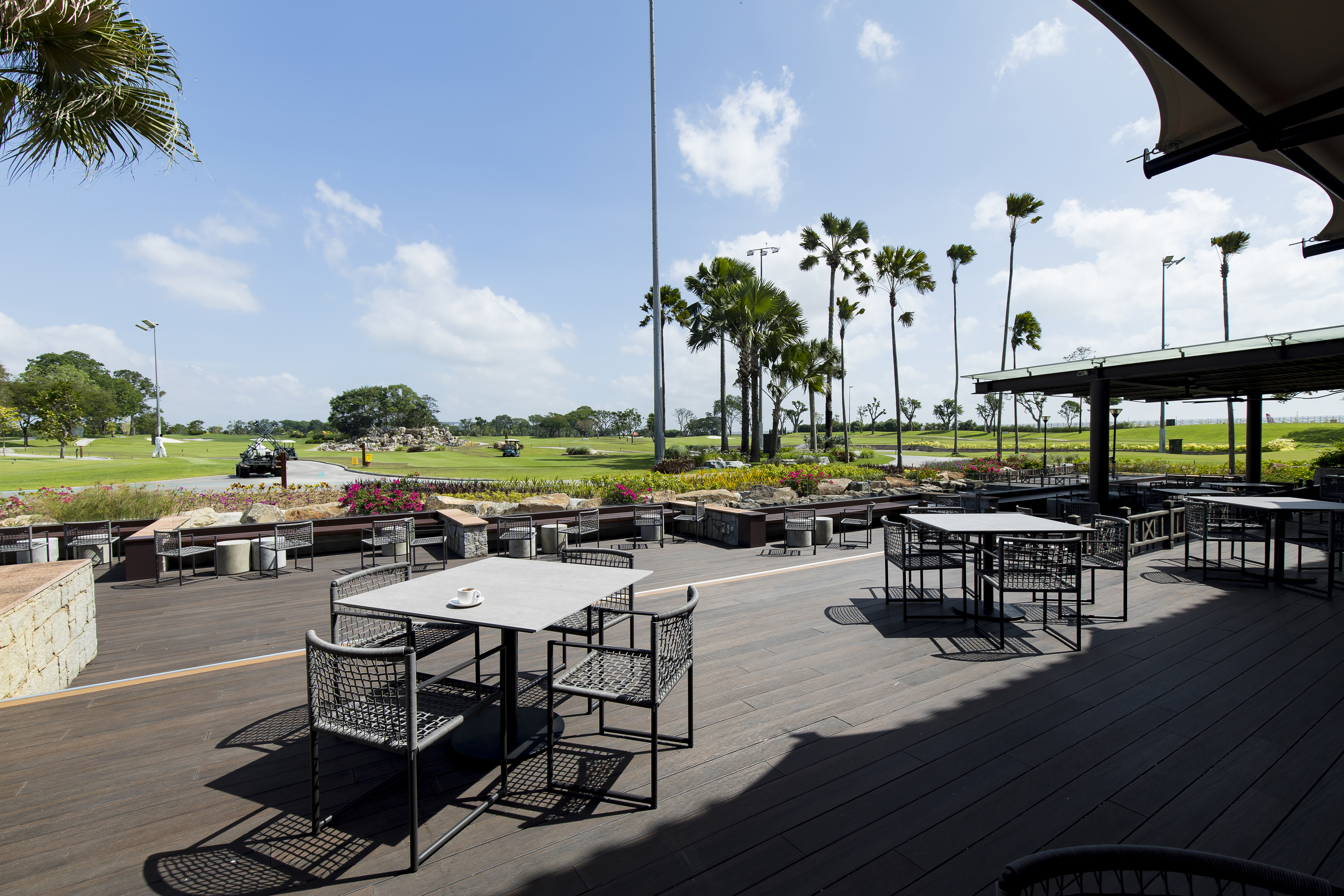 Alfresco at the Garden Terrace

So, has Robert Trent Jones II managed to deliver in the end? To say that Tanah Merah Country Club’s new Garden Course hasn’t fallen short of expectations… is putting it mildly. 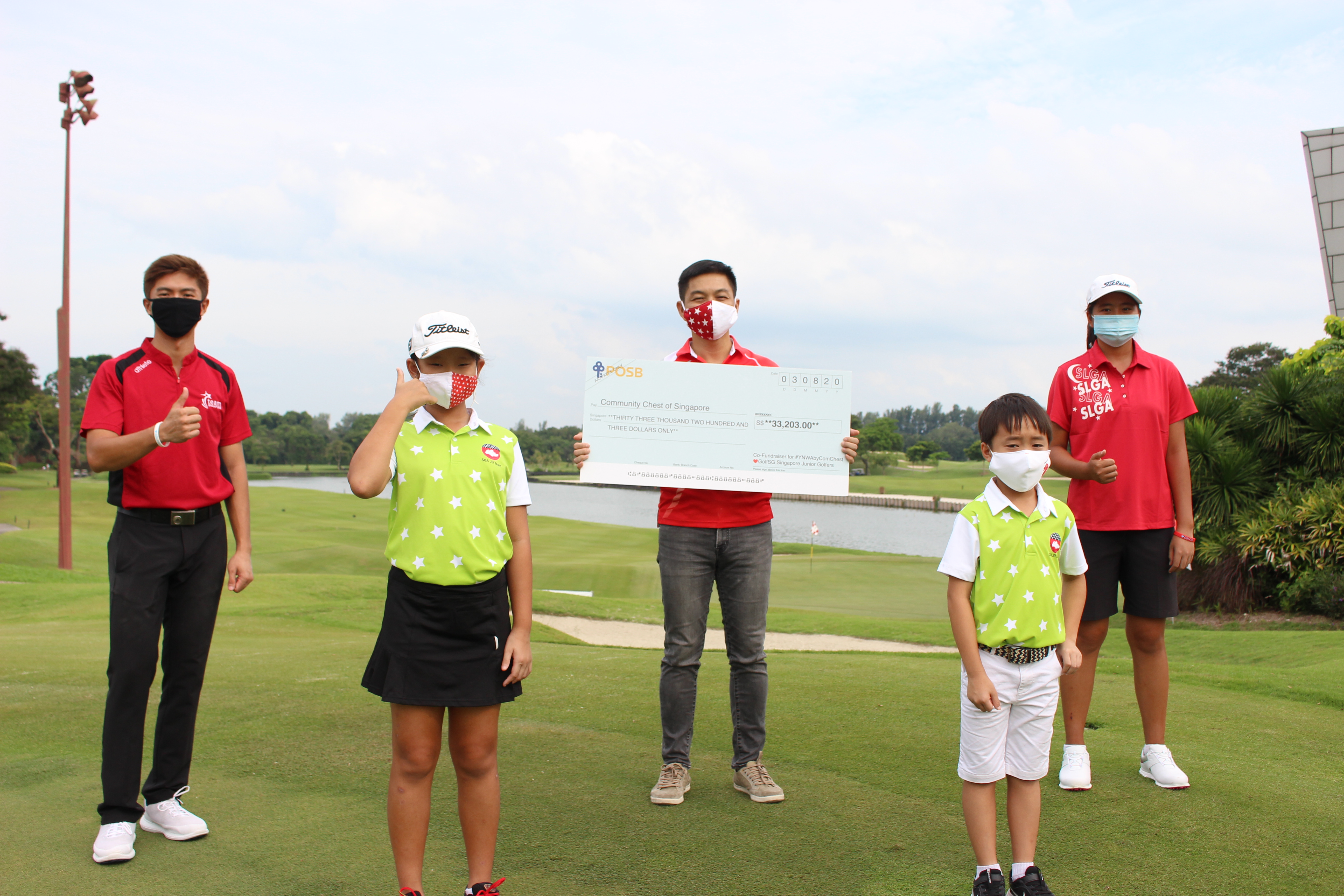 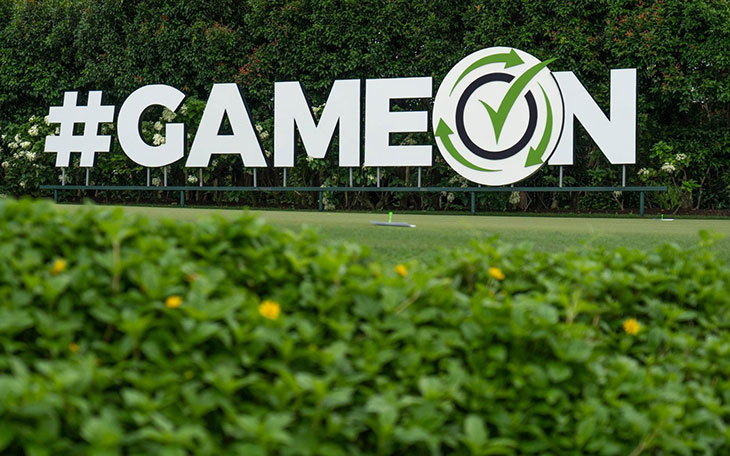