When you say the words, “Golf Legends”, three names will undoubtedly show up – Jack Nicklaus, Arnold Palmer and Gary Player. These guys revolutionised the way in which golf was played and became the first superheroes of the game to appear on a global televised network.

They put golf on the world sporting map. With 34 major titles between them, as the Italians, or more pointedly, Sicilians would put it, the three godfathers of golf dominated the 50s, 60s and 70s, and I was about to meet one of them at his own turf in the heart of Mafia-dom, Sicily. Situated on the southern tip of the island near the town of Rugusa, Donnafugata is approximately 90 minutes’ drive from Sicily’s main airport, Catania, which sits adjacent to the beautiful Mount Etna. On our arrival at the five-star Donnafugata Golf Resort & Spa sited within the rugged Sicilian countryside and basking in Mediterranean sunshine, we were presented with a feast of local produce and told that, unfortunately, we wouldn’t be playing the course as planned until the next day, but that we would be meeting Gary Player in a couple of hours at an evening reception. The dictionary defines ‘humble’ as ‘showing deferential and massive respect to a fellow human being.’ In his presence, I realised that the word ‘humble’ and its very definition was made for Gary Player. I shook the great man by the hand like he was my long lost grandfather and introduced myself, and for some reason, I bowed my head as if I was meeting royalty.

He seemed kind and gentle and made you feel comfortable. After I revealed to him that I was Singaporean, he immediately launched into an enthusiastic diatribe about his course design in Kranji and exhibited a knowing connection with Indonesia’s Ria Bintan Golf Club to the Singapore golfer.

“Ria Bintan was one of my best designs ever and the landscape is simply amazing,” he tells me. This was my first brief conversation with the man but part of me felt like I had known him all my life. At the reception Gary was meeting everyone and chatting to them one to one, reminding me of how the Queen at the end of the Royal Variety Performance, spoke to all the performers. It was, frankly, a little surreal but he got to know every one of us. When he got to me, he spoke about the challenge that lay ahead on his course tomorrow.
“I will be looking forward to playing a couple of holes with you tomorrow and I don’t want to see any shanks!” That really did make me feel at ease. 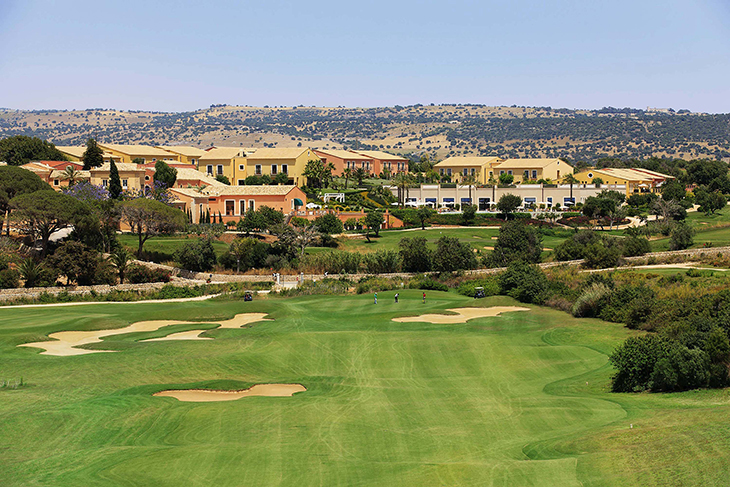 Roaming Donnafugata At 8.30am precisely the next morning, Player, accompanied by the Mayor of Rugusa, teed it up at the Gary Player Parkland Course, in which they both hit the opening tee shots. For the record, Player hit a high draw about 260 yards. The mayor hit a duck hook into the water. After the grand tee shot opening, Player commenced his golf clinic.

“I believe the biggest killer in this world over the next 50 years will not be war, cancer or malaria,” announces Player. “It will be heart disease. Obesity is going to be a big killer over the next five decades. Kids would rather play Tiger Woods on computer than be the next Tiger Woods.” Then he told us about his own fitness regime: 1,000 sit-ups every day – 500 in the morning and 500 in the evening, plus how us high handicap players (I’m off 15) conveniently forget what we could be learning from the pros.

“Amateur golfers nowadays forget what they are taught,” says Gary wagging his finger at us. “The biggest tip I can give you is, ‘if you put your foot on the toe, you make your dough’. Remember that today. I don’t what to see half-effort golf swings. Your body and torso are the biggest part of your swing. Forget about forearms, it’s all about your torso. This is why I do 1,000 sit-ups a day.”

In order to prove his point, Gary asked the burlyiest gentleman from the audience to try and push him over with one hand. It reminded me of how Harry Houdini used to convince the audience that he could take a punch from any man (which is, of course, what killed him). Player stood up to the bloke and, as hard as the big fella tried, he couldn’t push him over. Extraordinary for anyone, let alone a (then) 75-year-old. Hitting your first tee shot in front of a gallery is always nerve-wracking especially one based mainly of members, hotel guests, players yet to tee off and local residents none of whom I had ever met. Much to my shame, I hit my drive further left than Josef Stalin.

Thankfully, after that nerve wrecker, things got a little better, away from the crowds and with just Player’s design to take on. The golf course is typical Gary Player, blending into its natural surroundings, avoiding unnecessary site disruption and doffing its cap to Mother Nature rather than interfering too much.

Set a hundred yards from an archaeological site (featuring a Greek necropolis dating back to the sixth century BC), the course winds through olive groves and carob trees typical of the Ragusa countryside. The fairways and approaches to the greens blend in beautifully with the terrain surrounding it, giving you the feeling that you are truly immersed in nature. Alongside many of the holes are stonewalls typical of the area. It really is an amazing place.

The fairways are bordered by trees with little sand to contend with, but the greens are very tricky and defended by deep, penal bunkers. The feeling you get as you walk the course is that each hole offers a different challenge and that considerable thought has gone into making sure you never feel you are playing the same hole twice.

Playing the back nine first, I arrive at the 18th halfway through my round. It is a tricky finishing hole for any course. Water down the left, bunkers down the right, I hit it into the bunker some 20 yards short and right of the green with water in front. So I stepped up with the chip, took a swing and thought, ‘Ooh, nice connection’, and pitched about seven yards short and four feet to the right of the hole.

I thought: ‘Three feet from the cup will be nice’, but it was tracking and picking up speed, and breaking towards the hole and bang in the cup to a roar from my flight mates, and a watching gallery on the clubhouse balcony which included Gary Player with a cup of coffee in hand. As you do in these situations, you just tip your cap to the crowd and move on. I wish! I celebrated like I just won the Masters! I thought that was going to be the major highlight. But better was yet to come.

On to the front nine and the opening hole (my 10th) is a long par four measuring 430 yards. Some cool golf from the three of us got us to the front edge of the green. And who was there waiting but Gary Player who was going to play a couple holes with us. I was putting first and I couldn’t believe a three-time Open Champion and three-time Masters Champion is tending the flag for me. I struck the putt and put it to two feet, and he said, “Wow, what a wonderful putting stroke.” This would signal the start of the strangest 20 minutes of golf I have ever played.

The second hole is a par five measuring 520 yards off the back with a huge bunker on the right. My Achilles heel on the golf course is the driver, I get it right about one in 10 times. It’s either left, right, topped or goes about 25 yards. But with a legend watching you, your mindset changes. I hit one of the best drives of my life, to which Gary said, “Wow, what a wonderful swing, beautiful rhythm, wonderful tempo. You play once a week, I can tell.”

The ball went 280 yards off the tee to the middle of the fairway. I walked off the tee like the ‘cat that got the cream’ only to be outdone by a man 37 years my senior who hit it a good 15 yards past mine. 200 yards to the green, I get my 3-iron out and Gary says to me, “Benny, why don’t you try a hybrid?” I said, “Mr. Player, I feel more confident I can get close with this.” Miraculously, I was true to my word and put it to the front of the green.

“Are you sure you play off 15?” Gary said. With the ensuing eagle putt converted to a bird, we moved on to the 220-yard par 3. Again, with the 3-iron, I put it 40 feet left of the pin to which Gary said, “you over-compensated too much,” and winked at me. We moved on but before we did, I made sure I had my picture with the legend himself and the only time I have played near-perfect golf. It hasn’t happened since, and neither do I have a 3-iron in my bag anymore.

Back to Living I begin to wind down for the day but not until I tried out some of the facilities in the hotel. I was heading to the spa for a sauna, steam and jacuzzi in the Donnafugata. The spa is excellent, with a huge jacuzzi and spacious saunas and steam rooms make for a rather grandiose way to ensure privacy. On the way to the spa you will have to pass the gym, and who did I see on the exercise floor but Gary Player doing just as he said – his 500 evening sit-ups. I stopped for two minutes just to watch and I was in awe of someone so much older than me, who would wipe the floor with me in a fitness test. The next day, Gary left for home in South Africa after an early breakfast. I proceeded to visit Rugusa, the local town and enjoyed the Sicilian experience and the beautiful architecture that surrounds the city. The roads reminded me of the drive up Genting Highland – bendy, but with some of the most beautiful scenery I have seen.

The afternoon in the fading light was spent playing the other course at the Donnafugata called the Links course. And in my opinion is a little tougher than its more famous bigger brother. Designed by local man, Franco Piras, his vision was to put a Links course in Southern Sicily. He did not make a bad effort, and it reminded me in places of Kingsbarns in Scotland, one of the finest links you’ll ever play.

Both courses at the Donnafugata are sublime tests of golf which have hosted the Sicilian Open on the Gary Player Course. As a destination, it offers world-class play but more importantly, it is also a world-class destination for experiencing a beautiful culture, food and scenic sights.